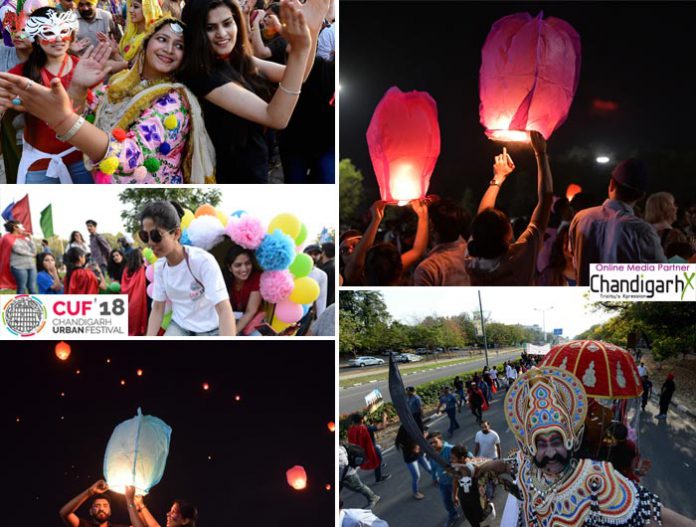 The City Beautiful, Chandigarh, had never seen such a riot of colors, passions roaring high, city in such a celebratory fervour. Thanks to Chandigarh Urban Festival, for it rekindled the community spirit, neighbourhood concern – Human interaction- back on table when talking about development. Over the last more than a month, around 50 zealous members ACT! Chandigarh team (a registered society of architects and concerned citizens of Chandigarh region working earnestly for a sustainable future), hundreds of volunteers have been working tirelessly to string the tricity together in a spirit of camaraderie and on March 25, the Sunday, saw the culmination of the long project but surely a beginning of celebrating tricity together.

The event was organised by ACT, a group of city-based architects in association with Chandigarh department of public relations.

Chandigarh Urban Festival 2018 kick-started VP Singh Badnore, Punjab Governor and UT Administrator, flagging off the carnival, the Open Hand March from Matka Chowk to Sector 1. Amidst the rapturous beats of dhols, hundreds of city residents from different walks of life painted the road in refreshing gusto. Rickshwas were adorned by students of Government College of Arts, the props for carnival were handcrafted by the Pink Foundation.

It concluded at 6pm at the compound of the Tourist Information Centre, located just a stone’s throw away from the Capitol Complex and the Punjab and Haryana high court.

There at Tourist Information Centre, there were all together a classical celebrations waiting. There was folk music and dance, classical dance, sufi songs that mesmerised the audience.

Ajay Sharma, one of the ACT members said, “This has never been done before and this is a sight to behold. Capitol Complex has been given the World Heritage status which is huge. We have to do something that matches that stature. I have a feeling people will remember his sight. This is an ode to this beautiful city.”

Why Matka Chowk to Sector 1 road for carnival?

There was a well-thought motive behind choosing this beautiful street. “This road beginning from Matka Chowk till the Tourist Information Centre was originally called ‘Ceremonial Road’ in the original plan of the city, designed under Le Corbusier. Chandigarh is a city of very nice and caring citizens, but unfortunately they don’t know much about the northern part (high court, Open Hand and Capitol Complex) of the city. Corbusier had designed this part of the city keeping in mind the openness of this city, but none of that openness is seen translated into the everyday activities of the city. Hence, we architects decided to get together and bring together the residents of the city to help them realise and make some noise about the fact that Capitol Complex has been given the World Heritage status, which is a big deal, but no one knows about it. The last two chief architects have worked really hard to do this,” said Bandana Singh (52), a senior architect living in the city for the last 28 years who is also a member of ACT.

“The Open Hand compound and the area before that was actually designed as the People’s Plaza where people could walk openly and freely and discuss anything with democracy and freedom by Corbusier, because that is what the open hand symbolises but unfortunately, this entire place has been blanketed with so much security that people don’t know about this anymore and we want to change that. Events like these should be a regular affair here and we want to hold this every year,” said Dr Prabhjot Kaur, Senior Architect and a member of ACT.

ChandigarhX is proud to be associated as ONLINE MEDIA PARTNER of Chandigarh Urban Festival.