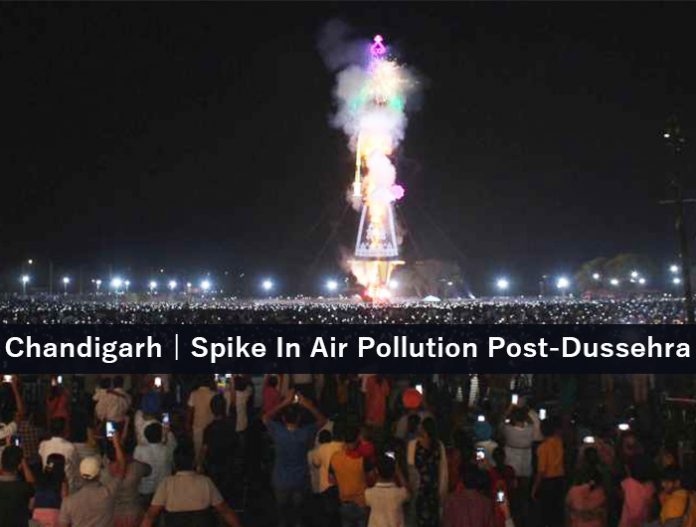 As Chandigarh boasted in pride of firing up world’d tallest Ravana effigy on Dussehra, the pollution levels in the city became harmful for everyone. The air quality saw a plunge that caused discomfort to people with lung and heart diseases. Between 9 PM and 10 PM, the Air Quality Index (AQI) was recorded at 147. Before this, on October 1, the AQI at the same time was 57.

This data has been released by the Chandigarh Pollution Control Committee (CPCC) yesterday. Real-time monitoring was carried out by Continuous Ambient Air Quality Monitoring Station (CAAQMS) at Panjab University, Sector 25. The machine is located near Dhanas, which witnessed the most expensive Dussehra event. Here, a 221-foot-high Ravana cost ₹ 30 lakh.

AQI Recordings At Other Locations

Kaimbala village and Sector 39 recorded average AQI between 70 and 85. On the other hand, as per a CPCC Scientist, these places gave eight-hour average data from 2 PM to 10 PM. Thus, it can’t give the right picture of pollution due to Dussehra. He added that CPCC is relying majorly on Sector 25 machine, which gives hourly data.

The Member Secretary TC Nautiyal, Chandigarh Pollution Control Committee (CPCC), however, refuted the findings of the data on portal and the app linked to the machine. As per him, the matter will be taken up with the Central Pollution Control Board (CPCB). But he added that the data released by the department on Wednesday is accurate.

Currently, Chandigarh possesses no data to quantify the proportion of various elements to the overall level of air pollution. So a source appointment study was decided upon by the administration. This would assist to prepare the required data.

Tender To Be Floated Soon

In 2017, Environment Department representatives in a meeting with Union Environment Ministry discussed that IIT, Kanpur, had procured Switzerland-made assessing devices to carry out the study in four cities. Chandigarh was also chosen as one of them.

Each device was worth ₹5 crores. According to Debendra Dalai, Director, Environment, and Vice-chairman, CPCC, the proposal was rejected last year as costs were high. Now, the department would float a tender to carry out the study.