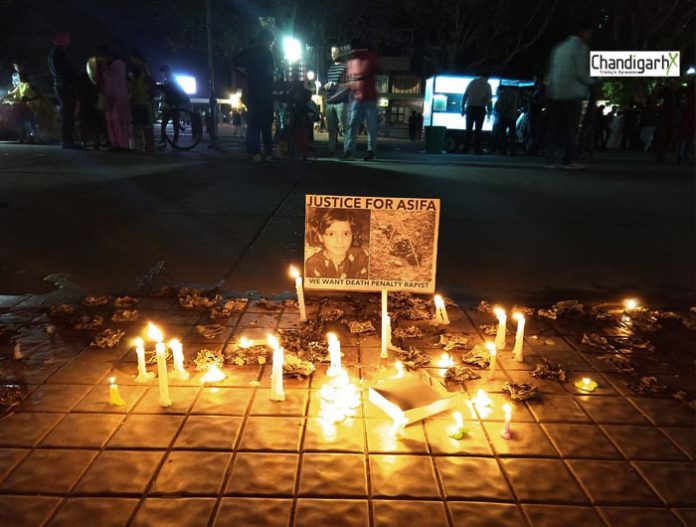 Sunday, the 15th April, 2018, Chandigarh’s sector 17 plaza raised to a level much above from its usual merry-making, shopping and leisure activities. It became a podium where concerned citizenry of tricity came together to express their anger and their disgust.

A citizen’s protest, absolutely apolitical, was carried out in the plaza demanding to bring to justice the heinous culprits of Kathua and Unnao rape victims. The students, professors, activists, lawyers, doctors, tricity residents from different walks of life came down to Sector 17.

At the protest, Varnika Kundu, herself a stalking victim, said, “We, the women, have had enough. We need to tell men that we are more than our private parts.”

Every rising sun newspapers are filled with gut-wrenching tales of how brutally women and little girls are treated. Stalking, eve-teasing, molestation, rape…

We cannot turn into seasonal activists whose conscience only care to wake up when a little girl is brutalized at the hands of a man who is drunk in patriarchal power at his disposal.

WE need to make it crystal clear that WE WANT power dynamics in the society to change to benefit all.

WE must wear absolutely ZERO-TOLERANCE attitude towards any disregard, let alone crime, towards women.

WE must make it clear ‘ENOUGH IS ENOUGH.‘

Power doesn’t rest in the coffers of top echelons of administration in a democracy. It rests amongst us, the citizens. It’s already high time we realise the potential of this power that we have in our hands to make things how they must be.

Let’s not wait for the cries of any more innocent little girl to wake us up.