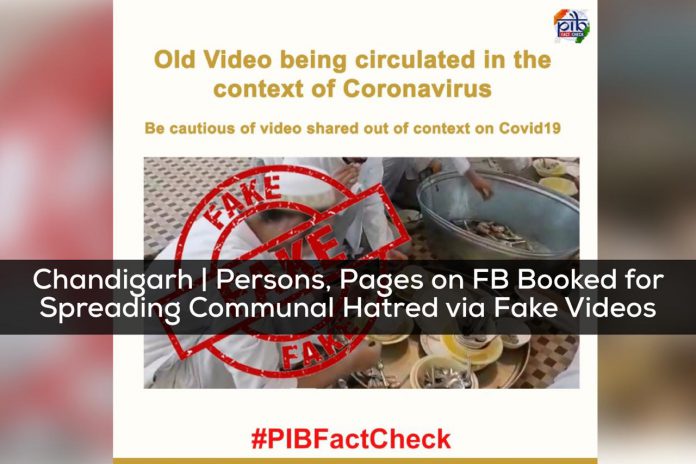 First complaint against Suraj Pandey: A facebook page said to be in his name had many posts spewing communal hatred in the wake of Tablighi Jamaat’s Markaz event in Nizammudin, Delhi, the posts were against those who attended it.
The police is yet to ascertain whether the page actually belongs to Pandey. He hails from Uttar Pradesh and resides in Chandigarh.

Chandigarh Police received a complaint on its twitter handle and an email sharing the said posts.

A case has been registered under Section 153 (want only giving provocation with intebt to cause riot) of IPC at Sarangpur police station.

Second is against members of ‘Sector 15, Chandigarh’ on Facebook group: Similar volatile and provocative messages have been posted on this group.

“Anybody found spreading hate against any particular community will be booked. There will be zero tolerance on such issues. These are sensitive times and people should avoid blaming one another” Rashmi Yadav, Deputy Superintendent of Police, Cyber Cell.

Following Union Home Ministry’s directions to states and UTs to effectively deal with fake messages on Coronavirus pandemic and lockdown, Chandigarh police cracked whip on the pages/persons on social media.

Many old videos and messages are churned on social media spreading communal hatred especially in the wake of Tablighi Jamaat’s Markaz event in Nizammudin, Delhi.

FACT: Government of India’s nodal agency for dissemination of official information, Press Information Bureau or PIB has debunked the video as unrelated to coronavirus and as old as 2018’s.

Not everything you see on social media is true. Please question. Try to find out the source of information. Get the information checked from here.

It’s already a sensitive time we are living in. Let’s stand together with each other NOT against each other.