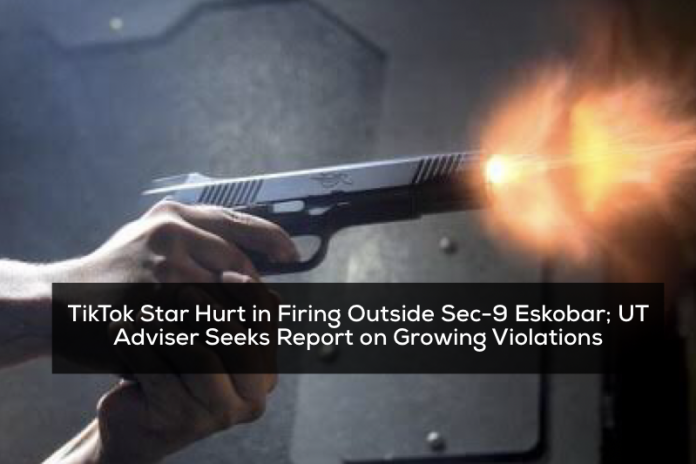 Three gunshots were fired outside Eskobar in Sector-9 in a scuffle between two groups. Saurav Gujjar (22), a famous TikTok star and background musician, was injured in it.

This is the second incident of firing in Chandigarh within less than 24 hours. Earlier, gangster Lawrence Bishnoi’s aide was shot outside a mall in Industrial Area. However both the incidents are completely unrelated.

According to the complainant, Akash (Zirakpur resident), he and two of his friends, Saurav Gujjar, Kunal, were in Eskobar at around 9.30 pm and the suspect Mouvis Bains, along with four others, was sitting on the other table.

There was a heated argument between the Mauvis and Saurav on the dance floor and the former threw cash on him applauding his dance moves. When Sourav asked a worker of the club to pick up the money, Mouvis slapped him.

The club bouncers intervened and both groups came out of the club where they again quarrelled. One of Mouvis’ friends opened fire at Saurav and his friends. One gunshot hit Saurav near his waist.

They scrutinised the footage of the CCTV cameras installed outside the club.

A case under Sections 307 and 34 of the IPC and 25/27/54/59 of the Arms Act has been registered at the Sector 3 police station. The police said raids were being conducted to nab the suspects.

Following increasing complaints of non-compliance of rules in city clubs, hotels, restaurants, discotheques, bar, and second incident of shooting outside bar, UT Chandigarh Adviser Manoj Parida has directed excise and taxation department to submit details of violations and penalised imposed on them.

As per the 2020-21 excise policy, penalty of Rs 1 lakh is imposed for first offence and Rs 2 lakh for second offence. Another violation can lead to sealinv of liquor vend and suspending liquor licenses of the bars, nightclubs, hotels or restaurants.

Source: The Tribune, Times of India