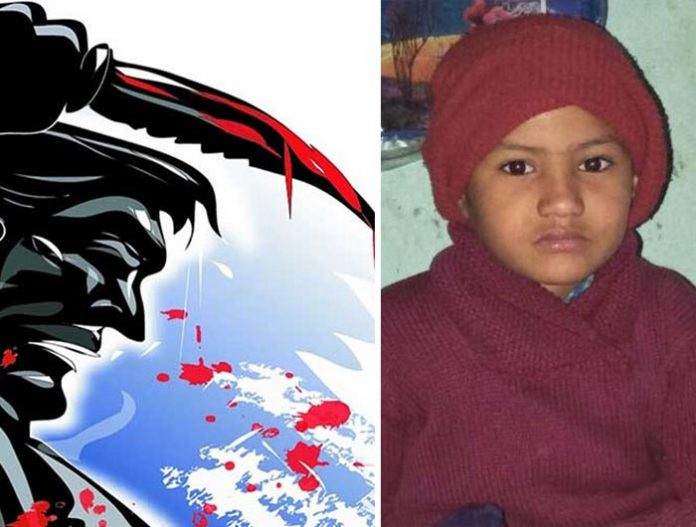 An absolutely barbaric crime was done in Chandigarh on Sunday afternnon. A little girl, Ujjala, merely 5 years of age was inhumanly killed by her own neighbour. The 27-year-old man, identified as Kamlesh, slit the girl’s throat with knife in broad daylight.

The accused is reportedly known to the girl’s family for the last 15 years.

The victim, Ujjala, was playing outside her house on Sanjay Labour Colony in the Industrial Area, Phase 1, Chandigarh. Her family was watching T.V. inside.

Suddenly, there was a hue-cry and neighbours rushed to Ujala’s mother that Kamlesh was “cutting her with a knife”. Kamlesh had held knife in one hand and Ujjala in another. In the most inhuman way possible, he slashed the little innocent child’s throat repeatedly in front of her family and neighbours. Everybody tried to free her from his clutches, but when they did, it was already too late. Ujjala was dead.

The neighbours thrashed him and handed him over to the police.

But, WHY did he do that?

The police said that he was a drunkard and a drug addict living alone for the past few days as his wife and children had gone to their village in Bihar.

The motive of the murder was not clear and no previous history or any other angle has been found in the case, the Deputy Superintendent of police (DSP), Satish Kumar said.

In his statement, Kamlesh claimed that he killed the child “because of Kali Mata’s influence.”

“We were getting her name registered in a school”

The inconsolable father shared with a newspaper, “Our family has been staying in this locality for the last 25 years and we knew Kamlesh and his brother for the last 15 years. My daughter was just playing outside and for some reason; he used a knife, usually used for cutting raw mangoes or fish to injure her brutally.”

He also added that, “My wife and I had come to the city to take her back thinking we would get her name registered in a school but this man has left us with nothing. We have been told that hey had tried to knife somebody else in the colony earlier as well.”

A case under Section 302 (murder) of the Indian Penal Code (IPC) has been registered at the Industrial Area police station.