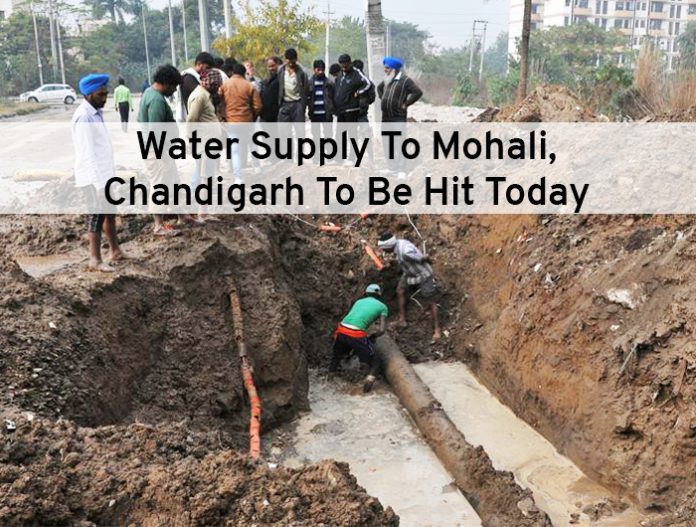 In the first two phases of the Kajauli waterworks, there has been a fault in the pumping machinery. Due to this, the water will be supplied at low pressure in Chandigarh today. Also affected will be parts of Mohali because of repairs in Phases 3 and 4 of the city waterworks. Sectors 70 and 71, Phases 9, 10 and 11, Industrial Area’s Phases 1 to 5, and Mataur and Shahimajra villages will receive low pressure during both morning and evening hours. Since the past week, many areas of The City Beautiful are already receiving low water pressure.

Out of the four phases of the Kajauli waterworks, Chandigarh receives 58 million gallons per day (MGD) of water. However, only half of this will be available on August 25 and 26. The Chandigarh Municipal Corporation (MC) has requested to use water judiciously. The situation will return normal from Tuesday.

As per a Chandigarh official, the first two phases are maintained by the Mohali MC. Incessant rains in the recent past turned the water muddy, delaying the filtration process.

Kajauli route the Bhakhra Canal water to Chandigarh through a 40 km pipeline. Since January 2016, Chandigarh has received 260 water supply breakdowns due to repeated technical faults at the waterworks. This data is as per reports from the MC Public Health Department. Some of the breakdowns were minor. But certain times, chaos continued for days in the city. The upgrading of the pumping machinery has been highlighted many times but to no avail.

Another issue is the lack of adequate storage in the MC water supply. The city’s current water storage fulfills the requirement for half a day. This implies water drawn from the Bhakra Canal in the morning is supplied in the evening. Then tanks are refilled in the evening for the next morning supply. This practice is tough to maintain in case of a fault.

A proposal was sent to the UT administration to increase water storage capacity for two days in a phased manner. Last month, the administration refused ₹38 crore special grant required for the project.

As per former Mayor Arun Sood, 80% of Chandigarh’s water supply is dependent on canal water. After Phase 5 and 6 of the waterworks are commissioned in the next few weeks, the availability in UT may increase to 110-115 MGD. Therefore, it is important to work on upgrading the pumping machinery to increase water storage.