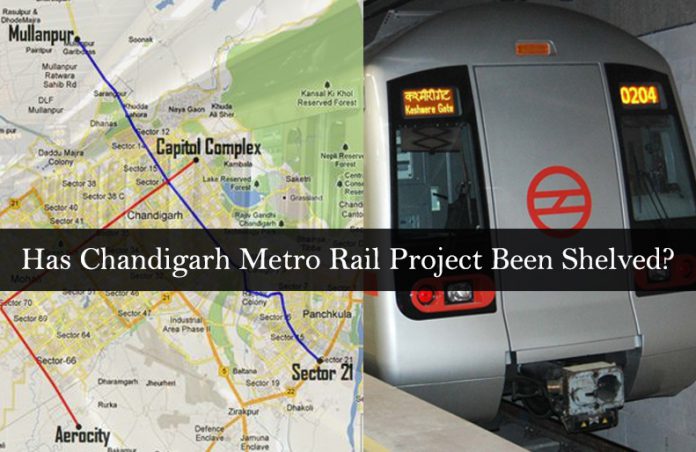 UT Chandigarh administration and Union Home Minister Rajnath Singh had a meeting on Thursday to discuss the much touted Metro rail for Chandigarh. But, crashing UT administration’s dreams to ground, the home minister asked to explore other alternative models of transport for Chandigarh. The minister is of the opinion that the project is unfeasible for a smaller city like Chandigarh.

Explaining the rationale for the decision, senior officials of urban development ministry said:

♦ Chandigarh is very small in size as required for a feasible metro rail project.

Even the UT advisor, Parimal Rai, also revealed the hiccups in the project.

♦ Rail India Technical and Economic Services (RITES) is asking for 200 acre land- not available in Chandigarh,

♦ High costing of the project of whooping Rs. 14,000 crore- financially unfeasible. Union ministry of urban development will provide 50% of the funds for the project but rest are to be borne by Chandigarh.

♦ Punjab and Haryana have still not given their consent in writing for the project.

In reality, the Metro project will not be possible before 2051, given the cross-system of network proposed by DMRC report.

As per initial plans, the work on first phase was to begin in 2013 but it got delayed which only escalated the price from initial Rs. 10,900 crore to Rs. 14,000 in seven years since DMRC report.

Chandigarh MP Kirron Kher had already opposed the project as “residents do not want the city to be uprooted.”

From day one, the project was always doubted. The planned total length of 37.57 km spanning across Mohali, Panchkula and Chandigarh, and summing up the tricity population too, it was still relatively lower as required for successful Metro rail project. And not to miss the huge financial cost.