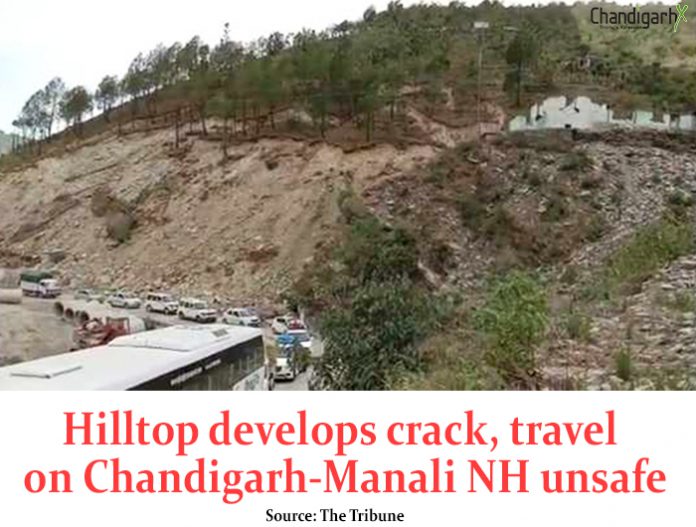 Blessed with natural beauty, and surrounded by green pastures and the beauty of trees, hill stations attract tourists throughout the year. Moreover, summer vacations are a time when people wish to move out of the scorching heat of the city and head towards a serene environment. But now days, we’re also aware of the increasing risk that these rustic terrains are bringing forth due to the unscientific cutting of these hills. In one such incident, as the hilltop near Deyod has developed a very large crack, travelling from Pandoh to Aut on the Chandigarh-Manali highway could turn dangerous now. With the rainy season ahead, villagers fear that this crack may trigger a landslide. As reported earlier, a landslide at Deyod yesterday, disrupted traffic for some time. The road was restored to traffic later.

Many villagers have vacated the area considering their safety. A team of IIT Mandi along with district administration officials visited the spot to analyse the situation. They are of the belief that human life could be at danger. Therefore, police personnel have been deployed on both sides of the stretch to check on the movement of traffic. IIT Mandi has developed sensors that have been put up in the area to check on early warning signs about the landslide.

There is a huge rush of tourists on the Chandigarh-Manali highway. People have been injured and vehicles damaged. The localites have blamed the National Highways Authority of India for this critical state, alleging unscientific cutting of hills. As a result, the whole range of the hills between Pandoh and Aut has become prone to landslide at various places.

ChandigarhX advises everyone to plan your journey with family and friends keeping in view the threat posed in the rainy season ahead. Except for an emergency, refrain from taking the route towards these hilly areas.