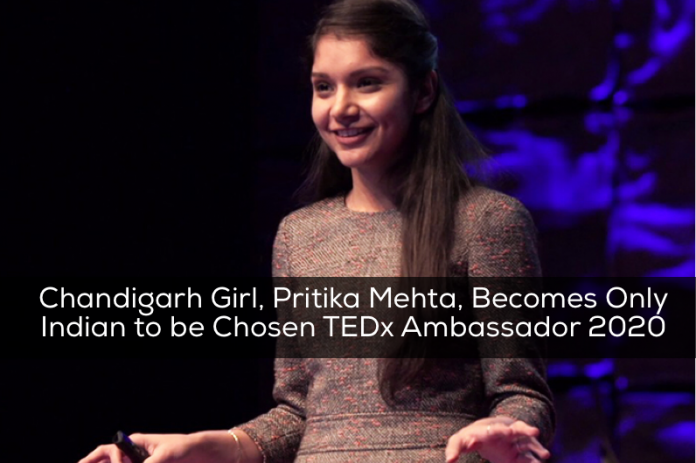 Achieving dreams, breaking stereotypes, re-writing history – all in a day’s work. Yes! Women have a lot of potentials. The only thing that can empower you to reach the top is the determination to never compromise with your career.

It’s a proud moment for India and The City Beautiful as Chandigarh-based Pritika Mehta has been chosen as TEDx Ambassador by TED. Given her long-standing involvement, leadership, and support for the platform, she has been offered the Ambassadorship role. Pritika Mehta, co-curator and first-ever license holder for TEDxChandigarh, organised the first in January 2017. The theme was ‘DREAM IDEATE CREATE’ to bring intellectual experiences to the people of the region.

Pritika leads initiatives to teach coding to young kids via interactive games. From smashing glass ceilings to pushing boundaries, this girl is redefining the scientific fabric of India.

Technology Entertainment and Design (TED) is a non-profit organization founded in 1984. It aims to spread ideas. The medium is talks by people drawn from all walks of life who have made a mark.

In her new role, Pritika will help in fostering the TEDx community in the South Asia region, and beyond.

She’s the only Indian among four ambassadors chosen from all across the world. The other ambassadors include Dora Dzvonyar (Germany), Florentina Niradewi (Indonesia) and Michael Barclay (Peru).

Pritika Mehta is a World Economic Forum Global Shaper, mathematician, Data Scientist, TEDx Speaker, and a thought leader. She did her schooling from DAV and Sacred Heart Sen. Sec. School and graduated from Panjab University. She holds a Masters in Artificial Intelligence from the State University of New York. She is one of the 25 women who was selected from all across the globe to speak at TEDxWilmington Women Conference in Delaware, USA. Her dialogue revolved around the upcoming work in the 21st century and how to prepare for the Fourth Industrial Revolution. She sits on the advisory board of Queen Elizabeth’s Young Leaders and mentors young Commonwealth leaders on AI and technology innovation.

But the zest to do something of her own led her to quit her high-paying job and move back to the city. In that one year, she started KiddyCoders (an initiative to teach coding to young kids).

Pulling Up Her Socks

She is a serial entrepreneur. Her first startup, BookMypresent, was in personalized gifting powered by data analytics. She is the co-founder of an edutainment venture, Mindbatteries. Pritika is also a co-founder of SockSoho. Through her tech career, Pritika has worked with three startups and multinational companies (Bank of America, Tripadvisor, etc.) in the USA as a Data Scientist. Pritika is a mentor at the ‘Girls Who Code’ to support and increase the number of women in computer science. She has also been selected as a ‘City Awake Delegate’ of the Greater Boston Chamber of Commerce. It is a position reserved for influential leaders in the US to spearhead economic growth.

Pritika is an honorary member of PhiSB in the USA. PhiSB is an invitation-only-network of females who are exceptional in their potential, achievements and drive to make a positive impact.

An Idea Worth Spreading

For this girl, challenges had been aplenty- be it in the personal or professional front. But she triumphed over social stigmas, sexism, gender discrimination and patriarchy with her intellect, hard work and mettle. She serves as a symbol of inspiration for millions of young women across the country to take a bold leap into a career in science.