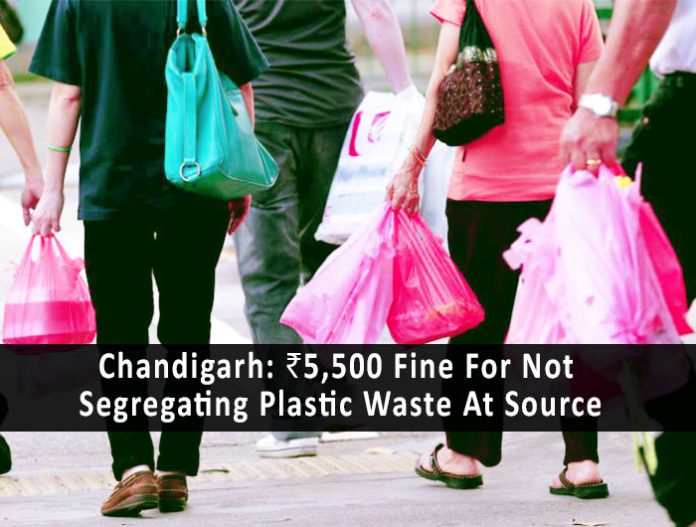 The general house of Chandigarh Municipal Corporation on Wednesday approved the draft of plastic waste management bylaws. It states a fine of Rs 5,500 to be levied in case of non-segregation of plastic wastes at source, using and storing carry bags or other items made of plastic. This will be sent to administration for final notification. In a meeting tabled by MC Commissioner K K Yadav, it was stated that suggestions and objections from public would be invited over next fifteen days on ways to minimize plastic waste.

Segregation of plastic waste will be done at source and stored separately.

Waste generated will be stored in accordance with Social Waste Management Rules 2016. The segregated waste will be handed over to authorized waste processing or disposal facilities and deposition centres via authorized waste collection agency or at personal level.

Waste generators will not litter or burn plastic waste. No disposal of plastic waste to drains or unauthorised places within municipal area will be tolerated.

In case of violation, waste generators will be held liable to pay plastic waste management user fee. This is stipulated by MC Chandigarh from time-to-time.

No Progress On Household Level

Segregation has still not begun in urban sectors of Chandigarh. As per BJP Councillor Davesh Moudgil, Rs 1.25 crore is spent in distribution of bins. The objective is to change the mindset of city residents. He questioned Mayor Rajesh Kalia on the MoU that was to be signed between the MC and independent garbage collectors. Since the Mayor and trashmen belong to the same community, to gather their support and take action on this would have been carried out at the click of a button.

In villages that have been recently transferred to the MC, segregation is being done at source. The department has purchased 99 vehicles to carry out door-to-door collection of domestic waste. Their capacity is 3.2 cubic metre. The dry and wet waste will be given by residents separately and will be collected in different compartments of the vehicles.

In another development, the general house of the MC also approved introduction of OR Code on water bills. This requires changes in the existing software. As per the agenda, water account number of the consumer and water charges bill amount to be paid by/after due date will have to be incorporated in the QR Code on left and right side. Good quality paper for printing will be put to use.