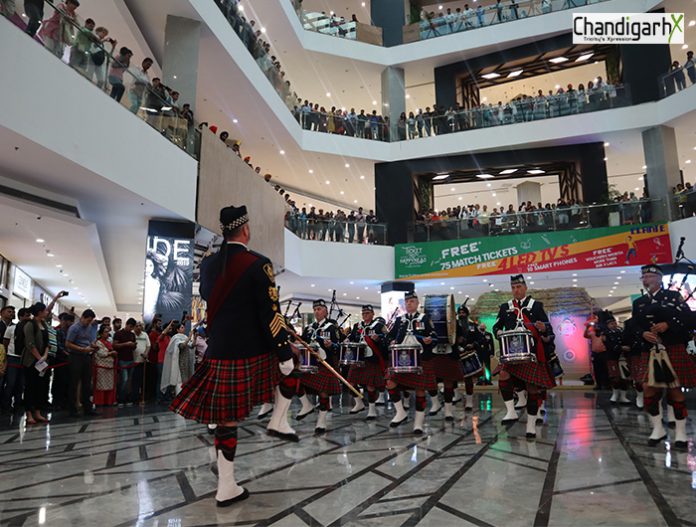 Elante Mall blends traditions and modernity in a seamless way with its events and celebrations. One such being this cross border cultural exchange. The friendship between two nations is bolstered by strong people-to-people relations and their cultural ties. Chandigarh’s fashion capital, Elante Mall echoed to traditional Canadian tunes on Tuesday evening. A 24-member pipe band of Vancouver Police performed to celebrate the strong ties between the two nations.

They are among the world’s oldest police pipe bands, entertaining people all over for more than a century. Playing their signature melodies, the highlight of the evening were the tunes of patriotic song ‘Sare jahaan se achaa’. Also present were Consul General of Canada, Mia Yen and Vancouver Police Board member Barjinder S Dhahan, a Gursikh. Led by Chief Constable Adam Palmer of the Vancouver Police, the band was accompanied by Deputy Chief Constable Steve Rai and Dhahan.

A mall for the trend-conscious, Elante has earned the distinction of being the only fashion destination of ‘The City Beautiful’. Spread across 20 acres, the mall caters to a quality shopping experience coupled with chic ambience. Elante boasts of some of the best brands and offers rather exclusive value additions. Housed in the mall is Funcity- the largest indoor play area for kids. The Courtyard is a one of a kind open air lifestyle space central to three distinct developments- Elante mall, Elante Office complex & hotel Hyatt Regency. The retail space hosts over 235 premium national and international brands. Strong anchors like Zara, Marks & Spencer, PVR Multiplex and an Entertainment Zone, Elante completes the mall experience for all its patrons.