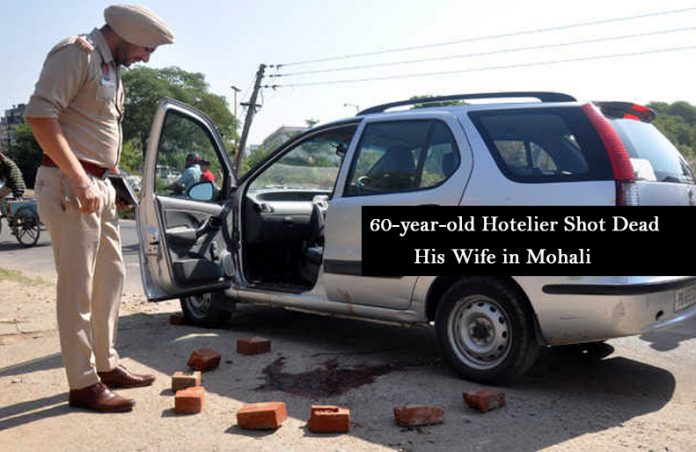 In a blood-curdling incident in Mohali, a 60-year-old hotelier shot dead his 62-year-old wife in a car. The incident occurred near Manav Mangal Smart School, Phase X,  on October 18 morning.

The hotelier, Nirankar Singh Sarao, owns a hotel, Sarao Hotel in Phase X, Mohali. He shot all six bullets of his licenced .32-bore revolver into the temple and neck of his wife, Kulwant Kaur, at point-blank range. Following a tiff with him, the victim was about to leave the car when he shot her.

She died on the spot and was declared brought dead at Fortis Hospital in Phase-8.

The couple was on their way to the PGI, Chandigarh, for a medical check-up.

He himself called the PCR

Eyewitnesses said Singh was in state of shock after shooting his wife and himself took out the body from car.

After shooting his wife, Nirankar himself called up the Police Control Room and informed the officer about the incident. A PCR team immediately reached the spot and found Nirankar lying on the roadside.

The police have registered a case under Section 302, IPC, and relevant sections of the Arms Act.

The couple had filed for separation six months ago

During preliminary interrogation, Nirankar confessed that he was being pressured by his wife and in-laws to shift to London (UK) after disposing of all his property here. The couple’s both children have settled in the UK. Even the couple had come to Mohali in 2004 from United Kingdom and set up his hotel here in Phase X. The couple lived on the first floor of the same hotel.

Nirankar was not in favour of leaving India. The couple used to fight every now and then for the same reason.

Third murder in less than a month in Mohali

This is the third murder in Mohali in less than a month. On September 23, veteran journalist KJ Singh and his mother Gurcharan Kaur were murdered at their Phase 3B2 house in Mohali.

Police are yet to crack the case.