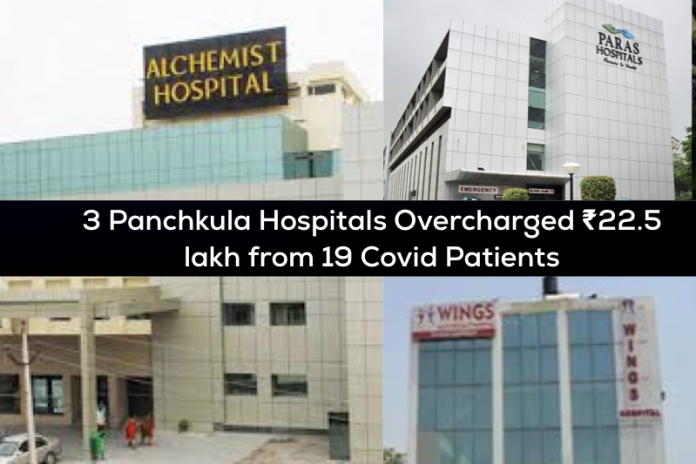 Private hospitals fleecing money for Covid treatment had been a shameless face of second wave of Covid-19 pandemic. As many as three private hospitals in Panchkula were found to have forced 19 Covid patients to pay a whopping Rs 22.53 lakh more than the prescribed rates in the district. The inflated bills were approximately 70 per cent to 381 per cent higher than the rates fixed by the Haryana government.

They had been given two days for reconciliation of bills and a week to refund the overcharged amount.

BB Singhal, member, Haryana State Pharmacy Council, and member of the district-level Covid bill monitoring committee, said, “In 19 cases cleared by the committee so far, 90 per cent of the refund amount has already been transferred to the bank accounts of Covid patients and their family members.” He added, “Only a few complainants are yet to receive the refund, that too because of non-completion of bank formalities. Those who shared their bank or cheque details have already got their overcharged money back,” he said.

Deputy Commissioner Vinay Pratap Singh, too, said a majority of the complainants had already got their refund. “The district administration has called a meeting of hospitals and Covid patients or their family members on June 29 for issuing admissible refund to those who are yet to receive it. Those who have already been refunded have also been invited to submit their feedback,” he said.

The bill monitoring committee was formed on the recommendation of Haryana Speaker and local MLA Gian Chand Gupta after several complainants approached him. The committee, led by ADC Mohammad Imran Raza, meets on a regular basis. It continues to receive complaints related to Covid bills since its inception late last month.