Home Latest News Chandigarh & Around 157 Drunk Driving Challans In Chandigarh. The Highest Ever in a Day
Facebook
Twitter
WhatsApp
Email 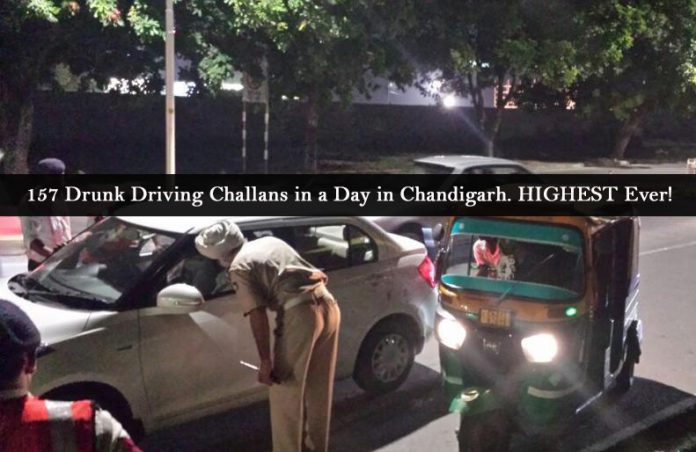 Chandigarhians have set a new record last night and its nothing we should be proud of.

The number is the highest ever in a single day. Their vehicles have also been impounded. Earlier record stood at 147 for April. Even on holi when hooliganism is at its peak, 90 challans were issued.

On August 30, the liquor ban in the city got relaxed, however taking pre-emptive measures, the administration made it mandatory installing breath analyser in every pub and bar but made it its use voluntary for the consumers there. Due to this the move has become a non-starter.

Month-wise Break up of Drunk Driving Challans in Chandigarh

On Wednesday, most bars and pubs offered complementary drinks to their customers. The police upped the number of nakas from normal 7-8 to 13. Tech-savvy residents have been using social media to know where is the police naka and avoid the route, to counter this police has opted for random checking.

The SSP (Traffic and Security) Chandigarh said, “The message has to reach home that Chandigarh is bot the city for drunk drivers.” The Chandigarh police have got 50 new alco-sensors/breath analysers and is pressing for strict punishment to drunk drivers to make it a deterrent.